After updating to 1.1.0 I noticed the new large battery status indicator, it is also mentionned in the release notes here on the forum.

However, after a night’s charging with the supplied ‘official’ charger, when I turned on the picopix max this morning the charging percentage is still stuck at 76%. The smaller indicator also says 76% . When now I plug in the cable/charger while the beamer is on, the light first turns from solid blue to solid red. And now after a few minutes while it is turned on in eco-mode the percentage starts running up to 77%-78% and the light is alternating between red and blue.

I’m fairly sure I connecte the cable correctly last evening and it also started flashing red/blue before I turned it off. There is an other topic on this forum where the beamer also wasn’t charging while turned off.

Does the power management maybe need to recalibrate itself by having a full depletion on battery after the firmware update/changes ? Is there any way to ‘reset’ power management? 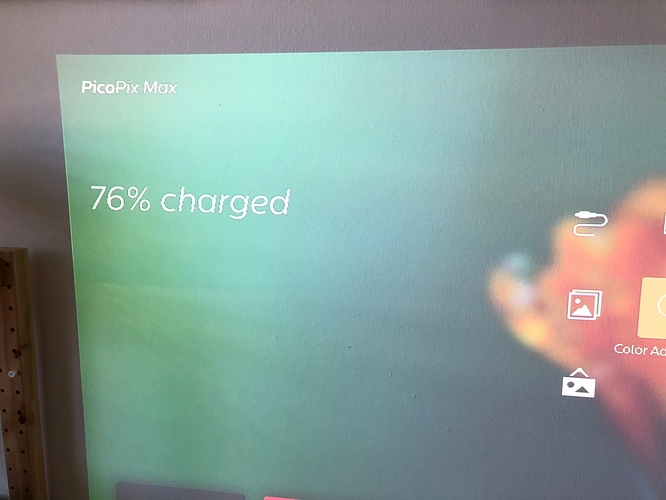 Then, turn it on and use it like normal.

Just to be sure, you are using the original PSU and Cable? Do you maybe also have a Third-Party Charger by hand?

Same problem here, I have not had success in getting only blue light, always the red/blue flashing. I tried the recalibration, it now goes to 99% then down to 86% ( when rebooted) Also see my attempts here: Charging - Led blinking blue and red when plugged

Hello after using the device to a out 70% on battery mode I put it back to charge. After a few hours I went to check and it’s still 98%

So I left it off and charge for another half hour. It’s still 98%

So I turn it o. On normal brightness mode and left it just on just on the main screen and I could see battery percent drop by 1% every 1 minute

Wondering if my battery has become faulty? Ive only used it not more then 3 or 4 time since receiving

This is mostly likely a display/rounding error. 98% is IMO alright.

Please calibrate your battery: run it down completely till it switches off. Leave it overnight. plug it in and charge it fully till led turns blue. Leave it plugged for a few more hours. Then, turn it on and use it like normal.

Mine will only charge to 99% no matter how long, but does get to 100% when switched on for a while, I’m in the process of doing this calibration right now after running it flat last night I’ve got it on charge now will see if it worked.
As for the battery percentage dropping by 1% every minute, I too have seen it and it got me concerned as well, thinking it will only last 100 minutes by that rate, but it must have self adjusted later because while watching movies on normal brightness it will easily last more than 2.5 hours, ha so yeah when you just concentrate and watch the battery, makes it drop quick

Thank you for sharing that thunderstrk

Yeah I am feeling it’s will last but the first 20% seem to come around way too fast. And maybe it’s cause of the new percentage making us go crazy about the number where as before we didn’t know?

Just annoying and confused about it all. Will give it a try. Let me know how you’re go, interesting to see if it does help

Ok, so calibration all done following the instructions, after first turning it on it was showing 100% charged
great, played around with it for a couple of minutes then turned it off took out the sd card to add and delete some files on a PC which took a few minutes put the sd card back in turned it back on and now it’s on 98% charged, after a few minutes it will get back up to 100%, switched it off again waited a few more minute to switch back on it’s back to 98%, repeated this process again and the last time it’s on 99% so back to where I started, by the way during this whole time it was always plugged in and charging with a blue led light,
Personally for my case it’s not really an issue whether it’s showing 98 or 99% as it does go up to 100% quite quickly, as long as the battery continue to last as long as it did I’m happy, but if it was showing only 76% charged after so many hours then that would be different, also others are getting the flashing blue and red led which fortunately I don’t have .

Cheers thanks for that, I just finished discharging, going to charge it soon, once it get a chance to cool down. I got close to 1 1/2 hrs movie time out of 70% with Bluetooth and steaming via wifi and on normal mode. I think I’m going to get something similar to yours from what I’ve seen so far, the flutating of the calculation.
like you saidas long as it’s not stuck at 76% with flashing lights think we are ok. Thanks for your time again. I’ll report back after my full charge

once it get a chance to cool down.

Cool down? I didn’t start charging it straight away either but had nothing to do with cooling, as it never really got hot a little warm perhaps, hope you’re doing it just cause you’re extra careful and don’t have an overheating issue

No no overheating, I’m leant to treat battery carefully eg after use and not charge it straight away and I theory should never discharge or overcharge them

But anyway I’ve charge it overnight and got up to find it with blue led on, turned on to have 97%
Then I retrigger charge by pulling it cable out and plug in after a good 5minutes it’s charged up to 100% but led never goes to blue even after a a good 10 minutes
So not sure if it is still charging… 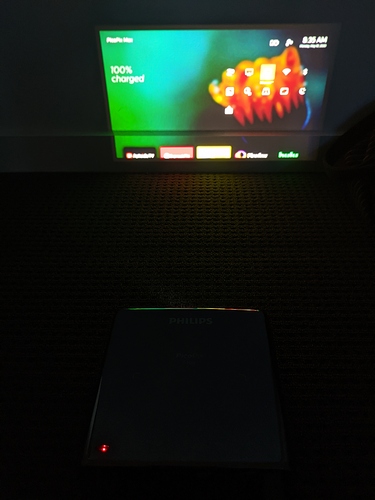 Then, turn it on and use it like normal.

I did this during the weekend.

Next morning I plugged out the charger, started the PPM on battery, when booted, the battery indicator percentage was 90% 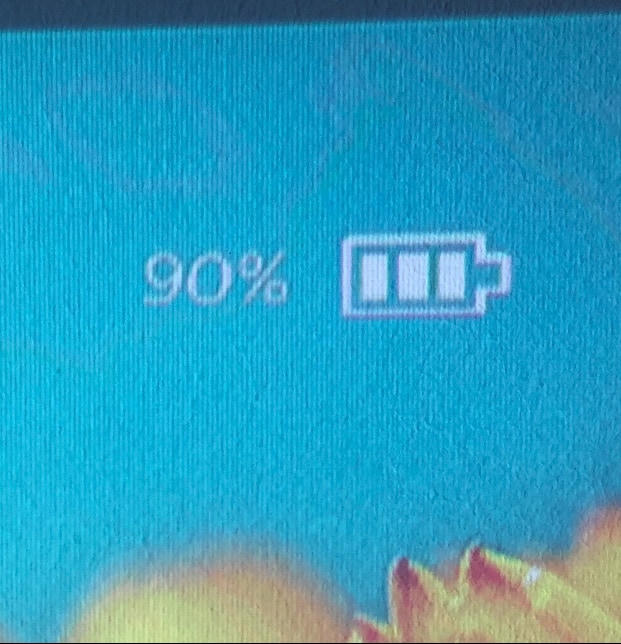 mine alsways charges up to 96% does not matter for how long it pug it in.

Mine will only charge to 99% no matter how long, but does get to 100% when switched on for a while,

This is normal, the battery monitor can have ±2% error, or somewhere in that range. There’s also trickle charging which takes a long time (hours) to reach 100%.

Please go by the actual play time you receive vs. the convenience indicators we have added. They are intended to give you a rough indication e.g. whether you can complete a movie you’re planning to start watching.

Next morning I plugged out the charger, started the PPM on battery, when booted, the battery indicator percentage was 90%

Hi @Freddy, when you unplugged it, was the LED on the projector blue, or red? Note that due to trickle charging and battery conditioning (including the room temperature), at what point it shows 100% can vary. Other users who are noticing the battery going down to 97% and then back up to 100% when plugged in constantly, are also experiencing the same. However if it stayed 90% after charging overnight, it could indicate a problem.

We plan to improve the battery percent display by adding some filtering, so as not to confuse users with fluctuating battery level.

Please state if the blue/red flashing issue is something you are going to attemt fixing in a software update, or if we need to report it as a faulty device. Obviusly a software soulution would be optimal, but if my device is broken, I need a replacement. My Pico, behaves like this:

I have tried recalibrating+factory reset but do not notice a difference on firmware 1.1.02