So after a 9 months wait, my new baby finally arrived. It was certainly not my longest crowdfunding gestation but after being burnt several times, I thought the Philips brand (although it is just licenced) and European based manufacturer would have ensured a more timely delivery. But I hadn’t counted on coronavirus - which definitely accounted for 50% of the wait.

So, now I’ve been playing with it for a month, can I tell you it was worth the wait? Well, I’m certainly happy with it but had I known it would take 9 months I may have chosen a different product, from say Anker or Xiaomi. And I certainly wouldn’t ever consider paying the claimed RRP of €899.

A big investment to upgrade

This is my 3rd pico projector, so I am a bit of a veteran and it’s interesting to see how these devices have evolved.

My first projector was an Optoma PK301 which I bought around 8yrs ago for around £250 (around €280) rather less than the £350RRP. It was a 50 lumens box that weighed around 250g. It had a memory card slot and built in media player that I found could play hardly anything. But paired with a low cost Sumvision MP4 player with HDMI out, that could play any format from a USB memory device, it proved great for kids movie nights on vacation. 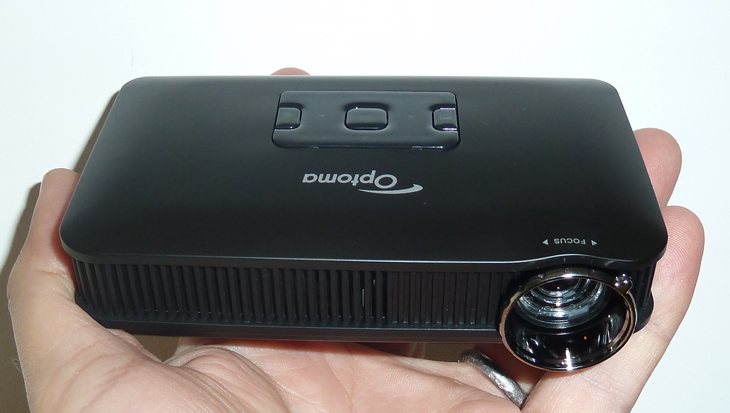 But the need for an external player and mains power did make it a bit of a cumbersome travel solution. So around 4 years ago I decided to splash out on a upgrade - a tiny pico projector the size of 2 phones, called the ECsee M6, also WXGA 854*480 pixels native resolution, a claimed 100 lumens, built in Android 4.4, a 4200mAh battery and wifi and bluetooth connectivity.

It only cost £150 (€170) with delivery from China that turned out to be a disaster. It couldn’t read from the memory card slot or USB, so I chased for weeks to send it back for a replacement - which was the same! After finding it also had a shadow at the top of the image, I managed to argue for a partial refund. So at least it cost very little.

With other quirks including random dying due to over-heating or the battery quitting early, you could imagine I hated it. But actually I learned to work around its issues and it became a workhorse, streaming via Netflix and Amazon or a portable wireless Seagate DLNA hard drive. 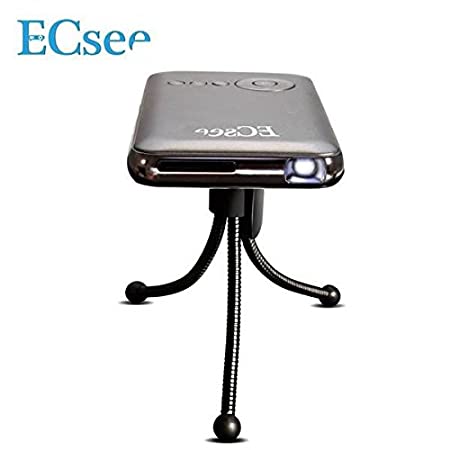 Movie nights had now become an essential part of every holiday. The highlight was a school camping trip where the little pico projector, lighting up a sheet hung from the trees, entertained 30+ kids of 8-12 for 2 hours. I had every parent asking where they could get one.

So, another 4 years on I was open to upgrading to full HD. Given how much joy my projectors have brought, it didn’t seem too much to invest around £375 in what seemed like it was going to be the best pico projector going. I hadn’t really clocked it would be more like £450 when you added VAT. So this has turned out to be 3 times the cost my previous pico projector. Expectations were not unreasonably high.

While the wait was long, I am glad I wasn’t one of the first to receive the device and I’m glad to say mine has worked perfectly out of the box.

First impressions are: it’s not ugly but it’s not the prettiest device. It adopts a much more traditional form factor than many contemporary pico projectors. I’m pretty indifferent to it’s shiny bronze exterior but it really does pick up fingerprints.

Portable but not Ideal for Travel

And it’s BIG for a pico projector, especially compared to my previous devices. I’d seen photos, obviously, but it’s hard to really tell until it’s in your hands. It’s at least 3 times the size and weight of my last one - not so great for travel. I’m not sure why.

Other omissions for a device you’d want to take abroad are a lens cover and a power lock. I certainly would never put this in the hold of a plane, where it could well start a fire if it came on in an enclosed space.

I’d also like the option when travelling to be able to boost it’s battery run time by running it off an external battery. Unfortunately, while it has adopted USB-C PD (Power Delivery) standard, which is supported by a growing number of chargers and batteries, the manufacturer has selected a non-standard voltage that is rarely supported. That also means if you lose the power supply unit , you’ll need to source a replacement from the manufacturer which seems to void the choice of USB-C PD.

Even with travel off the cards at the moment, my Picopix Max has had several outings in its first month. We’ve taken advantage of the unusually great weather we’ve had in the UK this Spring for outdoor family movie nights in the back garden, paired with a portable 120in screen.

Set up is much faster than I’m used to. It’s on and usable in a few seconds and the auto focus and keystone are great meaning you’re watching quickly.

Connectivity-wise it’s not missing anything. I’ve popped in a 256GB mirco SD card with everything we had on our potable drive. It also has a USB3 socket for more storage options and can take in video via HDMI or USB-C (albeit with some constraints on picture control).

While the CPU and RAM are modest for a modern Android device, the UI doesn’t feel sluggish. I know many have voiced concerns about the UI but it looks OK and is really not hard to get around. The remote works well, with keys or pointer. The touchpad on the main unit does feel like a bit of a novelty but I guess will come into its own if I’m ever without the remote.

One concern I have is app compatibility. There are versions of my favourite apps that will work, but sometimes the latest version doesn’t and the AptoidTV store encourages you to update to incompatible apps (which you must then to remove and allow default versions to be installed). How long before there are obligatory upgrades from App developers and the dev team at Screeneo have moved on to other products?

One app I’d love to work is Now TV but it just won’t. That’s also true when trying to sideload it to Fire TV. Sky TV really does want total control of the devices their app runs on.

I know how unsupported Android projectors are by Google and how much bespoke work developers need to do. Yet my previous, super-cheap device - also Rockchip-based - had the Google Play store and great compatibility (until relatively recently when some app developers have stopped supporting Android 4). Pretty much the latest version of any app just worked.

The Picopix Max’s built in audio is a bit weedy - not that much better than my phone - and I can’t really imagine ever using it without a bluetooth speaker.

But the image quality is superb for small unit. Much better than my previous devices. Bright enough, I’d imagine even for 200in in pitch black, though I’m not sure it feels 10x brighter than my previous devices. And HD makes so much difference to the experience. It’s much sharper. Colour representation is good too (although not on the highest brightness setting). The family are very happy.

I am also glad to report it doesn’t suffer the RGB prismatic effect, when you move your head too fast, that my previous DLP device did.

Optimised for the Office, not Movie Night

Unfortunately it’s throw is not ideal for movie nights, for which the ideal placement is behind and above your audience. That’s hard with this projector. It’s got a pretty short throw - not like those fantastic ultra short throw projectors you place at the base of your screen. But for a 120in image, it needs to be just 3m from the projection surface. This is great when space is limited but means it typically needs to be placed right in the middle of your movie audience. Plus the image is aligned from the base of the projector upwards, rather than equally above and below the lens, which means you need to place it quite low - so no one can sit in front of it.

It seems the optics have been optimised for office use, presenting close up from desk-level. But while in my work I do a lot of presentations, almost every office I’m in these days is equipped with a large screen monitor. Although wasting 10 mins getting kit to work does seem obligatory, I’ve never felt the need to cart around my own projector.

That said, the throw has turned out to be ideal for upgrading our TV room to a full cinema experience. I hadn’t bought it for this, but given it’s superb quality I decided to invest another £150 in an electric 120in screen, brackets, shelf and cables so I can use it for movie nights at home too. This makes it better value. 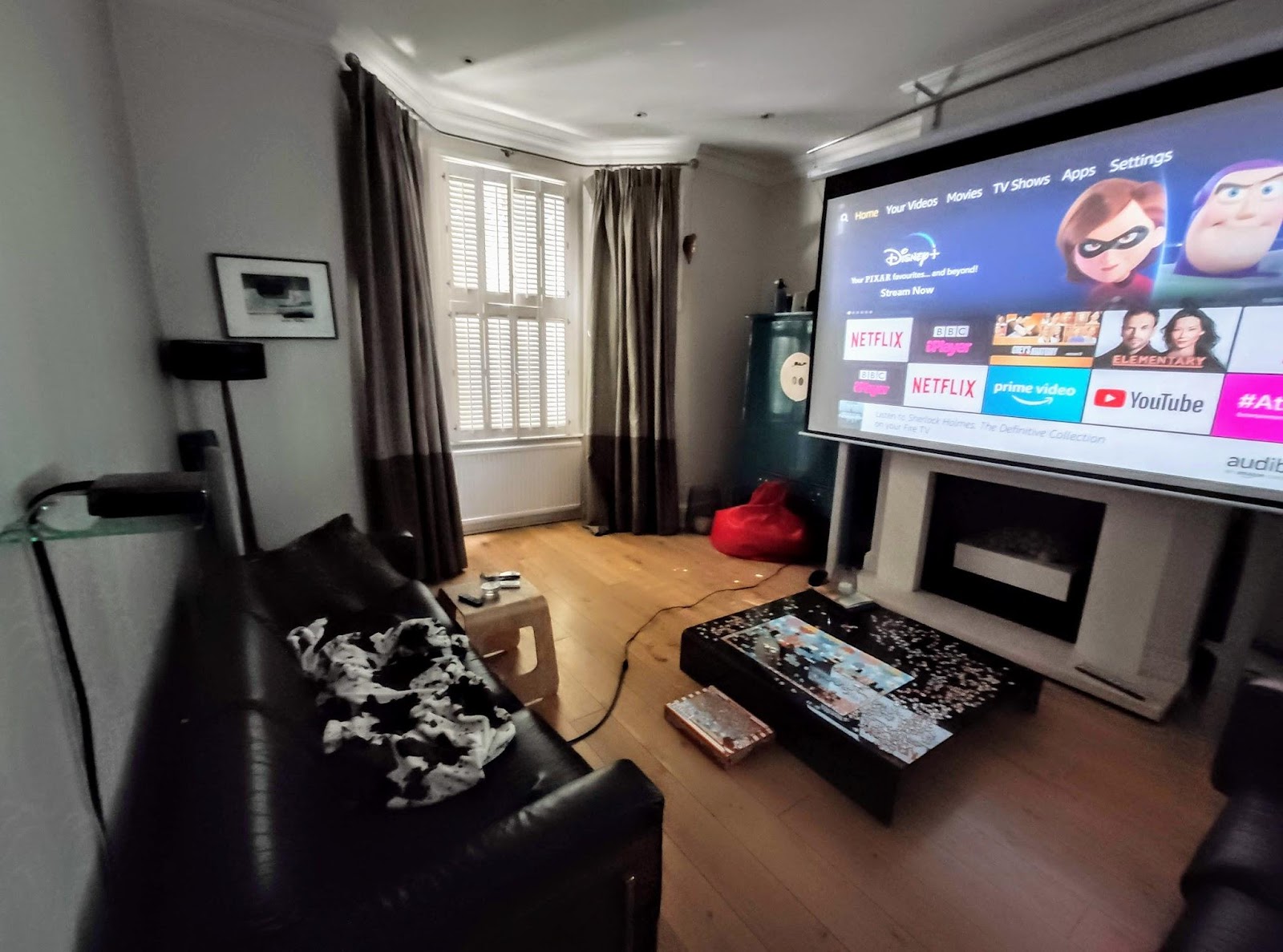 It just so happens the width of our TV room, already set up with surround sound, is 3m wide. So when movie night comes, and the weather is not great, I can roll down the screen in front of our 42in TV, switch the HDMI cable to the PicoPix Max, sit back and enjoy.

Given its throw challenges, the shelf is just above my head - but fortunately the projector is incredibly quiet and can’t be heard at all over the movie audio.I could have mounted it higher and pointed it down but the vertical keystone would have reduced the size of the image, and quality I’d imagine

So, putting the delivery delay aside, do I have any regrets? The answer is no. It’s a bit big and heavy but holiday movie nights are so much fun - and will be better with this. I will make the effort to take it away. They have certainly missed a few tricks to make it more travel-friendly. But it has presented a genuine option for a home cinema setup too, which I hadn’t been expecting. So I will get more use out of it. Which is just as well as it was relatively expensive. Given the competing products out there, however, I can’t see it succeeding at a price above £500/€550.