Today we bring to you the next major update for the built-in software. We have a lot of goodies for you in store:

The headlining feature: this update finally includes our adaptive fan speed algorithm. Many people asked us to slightly increase the core temperature in exchange for lower fan noise, well your wish is granted. In our testing in a normal summer room, we found the Presentation mode is now quieter than Normal mode used to be. Normal mode is quiter than Eco used to be. And Eco mode is almost completely inaudible. In more concrete terms, we have measured a -7 dB advantage, which is less than half the noise compared to before. With this update we are confident that for most people (remember it depends on environment!), this is going to be the quietest pico projector experience on the market.

The launcher has received a facelift and some often-requested features and bugfixes: 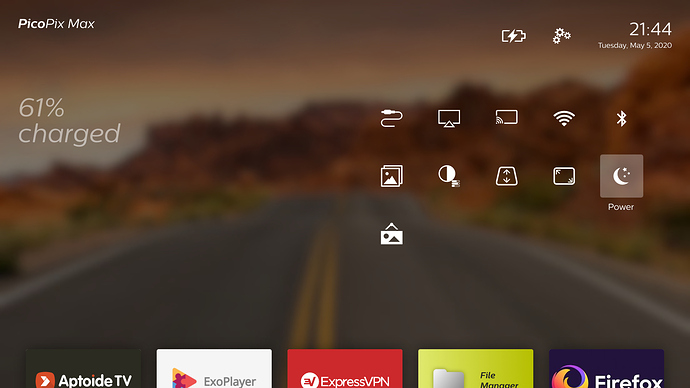 Several people reported that when connected to a 2.4GHz WiFi network and playing audio via Bluetooth speakers, there’s a lot of stuttering, specially when the remote control is active. This update improves the recovery algorithm for such interference. While the proper solution is to switch to a 5GHz network, we understand not all of you have this option. This update reduces the chance of a jam, and recovers more aggressively if a jam does occur.

This was an often-requested feature for some specific setups like projecting on a tilted rooftop. We have added manual keystone correction to this update. Just turn off the automatic one and then set it manually yourself. 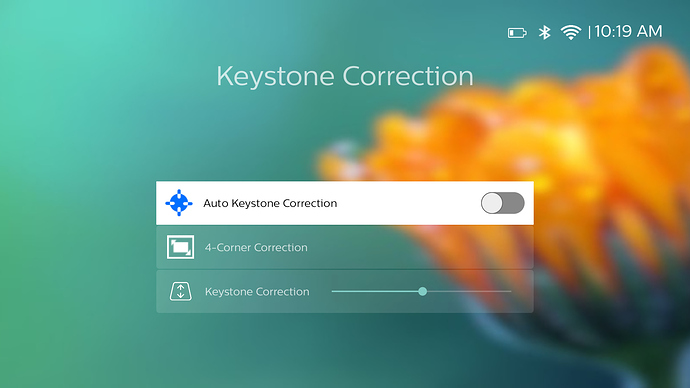 The low graphics performance when using heavy apps like Kodi, has been heavily discussed. We reached out to our partner Rockchip and together worked out a solution. I am happy to report that for most people the problem is solved, which also benefits everyone — even if you don’t use Kodi.

The main reason for bad graphics performance is the 4-corner correction feature which is very GPU intensive. Although most apps still work OK, Kodi is an exception because it uses 3 separate hardware overlays on top of the video. Other apps use perhaps 1.

After months of negotiation and technical discussion, we can present only one solution to run Kodi at 1080p with great performance: disable 4-corner correction if you need to extract the last level of performance out of the GPU. Together with an update to the HW compositor policy, this ‘solves’ the problem.

In our testing there is a massive visible improvement in GPU performance. The UI becomes completely fluid and animations run at close to 60 fps. It must be mentioned that other similar devices which run Kodi perfectly do not have a GPU-intensive geometry processing applied on top! But the silver lining is that all apps will benefit from this performance boost.

This will disable 4-corner-correction, if you need to use this feature, the graphics performance will be back to what it was on 1.0.x versions.

The system clock will now be saved and restored on power up. This helps solve the problem with certain apps (e.g. Netflix) which can’t play downloaded Netflix movies offline. The proper way is still to connect your PicoPix Max to the internet (even if temporarily) so it can sync its internal clock.

The on-board apps are not the latest versions. Please wait for the next minor release in a few days which will update them. If you’re impatient, you can install them manually:

You may also install them from the Aptoide store if you so wish.

Notably, we are aware of Amazon Prime Video not working correctly. The solution is to update it to v3.0.269.106747 using Aptoide, or the APK package above. As always, remember not to update NETFLIX and MX Player Pro.

How to get the update

Let us know your feedback. Hope you enjoy your improved PicoPix Max!

I still don’t get the update. Is it timezone dependent? or a rolling release?

One more question, can I turn off automatic keystone correction and still disable 4 corner correction and does having a better performance?
Thanks for all the work by the way!

I still don’t get the update. Is it timezone dependent? or a rolling release?

Wish for it with all your heart, it will appear.

One or the other will always be active right now. Later we’ll make it so you can disable all corrections entirely.

Just one question…
I’m in List 3, so probably I’ll receive the projector at the end of this month or in the first half of june… The download part in your text will be valid for long time or corrected before I’ll receive the PPMax?

Does anyone know why the “color moods/presets” switch that apparently has been in beta since February or so and lets you choose your own color temperature (like the “movie”, “vivid”, “natural” etc. settings on tvs if I understood it right from the forums) still isn’t public? Or has that been scrapped? I used the beta tester registration form when my PPM arrived in early April, but never got any reply or activation for the beta subforum and download sections. Would have loved to test that.

I’m okay with the colors in general, but still find them to be a hint of too greenish, especially the whites, so such a color mood switch would come in handy.

I feel the same with the colors. Out of the box they are to cold. Try to make them warmer destroys some color - like the green. So direct white balance settings (or modes) would be really appreciated…

Does anyone know why the “color moods/presets” switch that apparently has been in beta since February or so and lets you choose your own color temperature (like the “movie”, “vivid”, “natural” etc. settings on tvs if I understood it right from the forums) still isn’t public?

I’m a bit at a loss as to which switch / app you mean, can you share a link with me to where you saw this?

Are all the screensavers still the same?or have you added more? & on the new launcher on the main screen the icons on the right hand side does it give you the option to move or hide them or do they only show when you click on settings?

That color management app hasn’t been publicly released yet. Maybe they gave up on it? He already mentioned on January 16: “An app to fine-tune the colour is being released to beta testers and will soon be available […]”, too.

I’m really not sure why this doesn’t seem to be a priority anymore (and doesn’t seem to actually ever have been released) as these are main basic settings and users should easily be able to tweak them if they want to.

In any case, I’ve been eagerly waiting for it since then and always been disappointed when it once again didn’t show up in the new FW’s changelogs.

If you filled the beta application form, @PhilipsEngineering will find it and add you to the beta group, at which point you can get this app.

Next update on color adjustments and Pico Pix Max will be 5/5.

I get an error, “Not a valid update package!” when i update.
What’s happening?

Extremely impressed with the update.

Very noticeable GPU performance improvement. All apps including Netflix, YouTube, Hulu and Prime Video will play smoothly with no issues with judder or stuttering.

60fps videos that were once unplayable will now play smoothly as intended.

UI is fluid as well. Congrats on the developers that are making this happen. Thank you!

the servers are under a heavy load

thx, its solved after a few times trying.

Wow. The reduction in fan noise is remarkable

Wow the fan noise is down for sure , by so much that it’s scary, haven’t had the chance to test and monitor it for long will do that tonight, but it appears the fan is not even on, had a quick measure with the decibel reader on the Apple Watch and all 3 modes are the same at around 37 decibels, is this normal? my room temperature is about 16-17 so maybe the temperature is not considered high enough for the fan to kick in yet? I hope that’s the case will run it for longer tonight to see