version 1.0.27 is available now for a day or so for your confirmation. If no major issues are found it will be released to public this weekend.

The changes in this version are:

Giving effective 2x scaling at logical 960x540 (but of course true 1080p). Please let us know your feedback whether we should release it to public or not. Internal feedback is divided, where people prefer 240dpi (UI looks like approx 720p), but I think integer 2x scaling is better and more standard (e.g. FireTV and Philips Screeneo S4/S6 use this scaling).

#9b. Settings, File Manager and Autofocus UI has been scaled for 2x.
#32. Launcher is updated, now shows some apps that were invisible before, but there’s still a bug where not all previously-hidden apps can be launched yet.
#13. Low battery warning dialog is added.
#26. 3rd party apps now have read and write permission to external media.
#6. Brightness/contrast of internal Android is now matched to HDMI (This hack is no longer required – please let me know whether you have to click Reset in this screen to get normal colour).
#28. And Kodi supposedly works fine on this build but I have not tested yet.

I’m excited to test!
Just to be clear about the brightness/contrast, what’s the expected behavior if we already applied the workaround? Should it be changed by the update or should we reset the color to get the intended settings in the update?
Thanks!

I am still updating my own picopix! Don’t know yet…
(I’m out of office till next week)

I had Kodi working without any problems already, what were the issues that this build supposedly prevents or fixes?

Really? Kodi is quite bad in my experience. Other players such MX Player feels smoother.

Hmm… Kodi showed HW decoding when using the STRG-O overlay already in older FW versions. Videos came out quite choppy anyway. - Do you know what exactly has been changed here in 1.0.27 to get better Kodi performance ? Will verify it soon…

Just did some tests with 1.0.27beta. Some observations.

It’s expected that it should have been fixed with this update. If not then @Philips_Support_P the issue would still remain open for fixing in next critical update.

Regarding the “launcher not showing all programs” issue. I have a vice versa problem.
I installed 1x ePSXe and it is shown twice (two Icons).
One just opens the app, and the second one just crashes the launcher (the launcher goes to black and starts again). 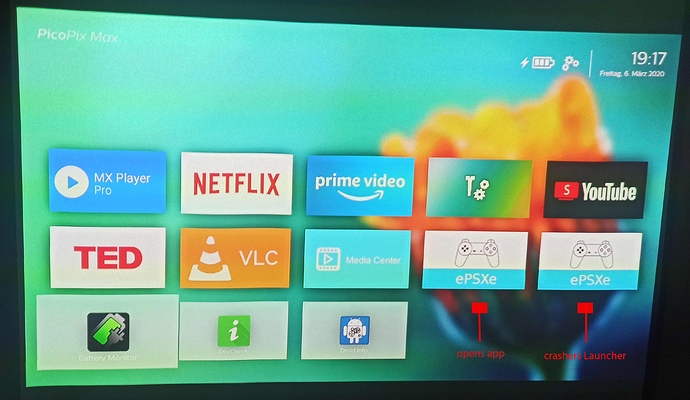 I agree with @kugiigi, the DPI increase is a massive improvement but having an adjustable font size would be the best situation. You could put it in the image settings section. A slider from 1x to 2x in increments of 0.1x would be awesome.

I find I still have to keep the colour hack to have a good picture. If I reset the hack then the blacks basically get crushed so I moved the sliders back to where they were as per the hack and the picture seems better. It might be my eyes though so I will attempt some calibration this weekend to see how it is.

Also, after the update my netflix app icon is now the default android head icon. The app launches fine but it looks weird on the launcher. Its not the full banner it used to be.

My Netflix app is fine. Perhaps you can reinstall it. I forgot to mention, Kodi seems to be the same. Still not smooth navigation and playback.

As for the contrast/brightness fix, it seems that it just defaults everyone with the settings in the workaround fix. I wonder though if the update override my own settings because I wasn’t sure if I set them exactly how Philips want

Do you mean brightness/contrast is set by default to the tweaked settings in the hidden video settings app ? So resetting them to middle values results in the same problem as before ? At least that was my observation when testing it…

It seems that’s how it is. It would be better though if the settings with everything at 50 would be the “ideal” settings instead of what it is right now. Just to remove confusion and for people not to reset the settings by accident.

We will probably skip this from public release due to the numerous issues. But luckily most are known:

And finally, there’s no immediate plan for a DPI slider since this change needs to be done in the system image, it’s not easily configurable without rooting (yet).

Good luck and looking forward for the next beta.

I want to quickly get some feedback in, I filmed a whole lot of stuff that I have to edit first before uploading it privately.

I’ll update the post with my video later on, once I manage to edit and upload it.

I like the 2x scaling but it still doesnt make sense for me to use the inbuild operation system. The picture quality when using f.e. Prime or Netflix is still miles away from my attached FireTV4K Stick. BTW: I didnt use INFO: How to improve internal video picture quality? and dont want to use such manually optimization in a “plug and play product”.