What device do you use with your Picopix?

Just a quick one. As my device has now shipped I’m wondering what everyone is using with their Picopix to figure what will work best.

Do you use the built in operating system or do you prefer to use an Amazon fire stick or Google chromecast for example?

If its reccomeneded to use such an item I’ll order one :).

Only internal apps, this evening I connected it to my Pioneer receiver as the second monitor out and routed some PS3 video to it, with the sound coming from the receiver for the big cinema audio.

I use it as a portable projector, (what it was designed for) for family movies in the garden, reading movies off the internal storage or WiFi streaming apps. It works fine. Haven’t seen the need to plug in USB or HDMI devices, especially given the restrictions in setting up a rectangular image.
I use a Bluetooth speaker as the internal one is not great outside.

Built in apps works ok, using HDMI will introduce some limits with bluetooth audio output. (Use analog output or have the HDMI attached device to redirect audio output)

So, I use both and do switch HDMI devices when needed!
Apple TV 4K works fine, (BT Audio output used from Apple TV)
Google Chromcast Ultra used for Stadia, works fine for gaming.

More to be tested…

I think I’ll stick with the onboard OS for most use as it seems like it has everything I’ll need . As for audio, I plan on connecting the PicoPix up to a speaker with the AUX output :).

To be honest, if you use the Aptoid Store, you can probably get most of what you’d find on a Fire stick or AppleTV anyway. Amazon Prime doesn’t work for me but I can cast from an iDevice if needed. I may need to download a different version.

I’m hoping the internal apps will improve but for a lot of my uses especially for quality movies I’ll be using the micro sd card from downloaded content files and that so far has been great with the multiple preinstalled players in both audio and video, YouTube app is also decent, I don’t do much subscriptions besides Netflix, for now and that is usable but it needs to be further improved, casting airplay screen mirroring or what ever you wish to call it is also very important to my needs, and that definitely needs improvement

For my needs, onboard and Aptoide (or Apkpure) downloaded apps are doing the job, with bluetooth sound.
AirPlay is working great too

.
I tried with AppleTV and it works as well, but as it comes through HDMI, I can’t correct the picture.

Mine is probably with yours @Tom123 for the UK?

But my planned usage is garden movies (used my Epson TW6700 the other night, it was fantastic - projected on the fence so the neighbours could watch too, but a PITA in the ass to take down and reset up afterwards) I’ve ordered a Duronic 100" projector screen to go on some velcro on the garden fence - only £18 on Amazon (beats using the creased bedsheets!)

PLEX and my home movie collect via USB or MicroSD via VLC I imagine, or perhaps PLEX (not used this for local files yet) not sure.

Netflix and possibly Disney+ is about the only other software ill use for now.

I’ve ordered an adapter so I can use PPM on my GoPro mounts so I can use it in my daughter’s room on a clamp mount, so we can watch movies on her ceiling as a treat and for mounting in the camp trailer - I want easy on and off and have one set of mounts for all my tech.

I do hope it ticks all the boxes for us

Last to find is a case and a 15v/4amp battery bank.

a quick question when installing new apps what happens if you unplug the projector will you lose the apps? or are they saved automatically on memory?

Yes, the unit has 12GB available for storing apps, data, and other content. Once installed the software stays on the unit until you do a factory reset, even a firmware update does not overwrite the installed apps (unless they’re part of the firmware).

What speakers would you recommend for the PPM?

I’ve been using my Bose speaker with the Aux cable.

Any speaker with an Aux lead will provide a great experience, I prefer that over bluetooth purely for the reliability factor and no need to worry about latency.

image4032×3024 2.58 MB
I’ve just started to repaint and dedicated this whole wall as a projector screen, it’s about 3.6 metres wide, when filled up I can get almost 160 inches, with just the sound bar placed on the floor and a sub woofer on the side 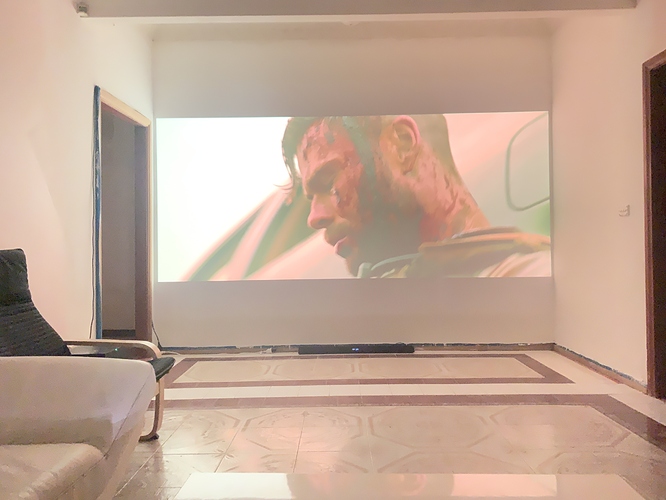 ^ exactly the setup in my home (but with a bunch of different projectors). And Samsung soundbar.

I just setup wherever I happen to be when I get that feeling of needing projectional healing.

So far I’ve been really impressed with my PPM, worth the wait!

I have a Panasonic amp running a Bowers & Wilkins surround sound system; up until now we’ve just been using this for audio. My wife didn’t want a permanent projector as it’s a family room so the PPM is a great compromise for us.

I’ve just bought an Apple TV 4K and am running that through the amp via HDMI and then HDMI to the PPM. The latest version of Apple TV is great, I have a first generation of this in my living room, but there’s no App Store on it. The 4K version allows you to download loads of streaming apps. Dependent on the film, and app, this can also output Dolby Atmos which sounds great.

I did have one question, and I’m not particularly technical! I was having a play with the Apple TV settings, the default output is 1080P SDR (which is crisp and bright) but there is an option for 1080P HDR (which seems worse in quality); I naively assumed that HDR would be better, but that doesn’t seem to be the case, anyone know why?

I think I might invest in a better tripod, the standard one seems a little flimsy, but other than that I think it’s great and for my situation (not wanting a fixed projector) perfect for occasional cinema nights!

It’s really nice to be using this community forum for what it’s intended, instead of being embroiled in the shipping delays (which I was also reading on an almost daily basis!).

@Philips_Support_P
If I want to use the phone audio output (instead of BT)… What are the audio characteristics? I mean band pass, distorsion, impedance, voltage, bit number from dac… Etc… I have searched on the data sheet… But nothing… In other word… We have a nominal full hd projector… There is hope to have at least an HD stereo audio?

i have this set up on a floating shelf to a 80" screen on the wall with a 4K android box doing the donkey work on kodi. Bluetooth speaker or headphones attached to the android box. Then in the garden we have a self supporting floor screen 100" for when the weather is nice. My 5 yr old son loves watching the old star wars movies on it