I was wondering this! Thanks @WMT

Does the onscreen keyboard still show when your keyboard is connected?

Anyone who has a remote with keyboard, you can install Null keyboard to stop showing the on screen keyboard

Yeah, we discussed that that really shouldn’t be necessary, but it might have to do with how AOSP was modified to work in a projector. Normally Android will hide the on-screen keyboard as soon as a physical keyboard is hooked up either directly through USB or through Bluetooth.

Been using mine with Aerb trackpad great match for the pix 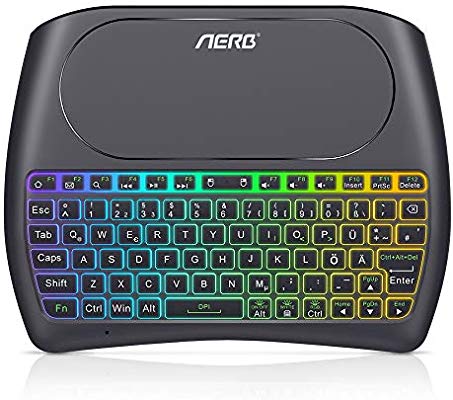 That’s not a Bluetooth keyboard. Is it?

No there is a tiny usb dongle, but it works very well. I want the blutooth for speakers

You can have both a speaker and input devices such as the AirMote and keyboard/mouse connected simultaneously using Bluetooth, freeing the USB port. Android treats input devices very much the same over Bluetooth and USB, HID is HID for the most part.

Good to know guys, thank you, however the AERB keyboard is so sweet to use I’ll stick with it.
I do have a tiny folding blutooth keybpard with touch pad but its just not as ergonomic

Just gave a wireless keyboard a try. It’s a Logitech unifying, so it should be a plain usb hid. The on screen keyboard is pretty erratic. Sometimes it shows, sometimes not. Sometimes it doesn’t show but causes the browser to reflow.
What is worse is that in several applications including the browser, the enter key works less than half of the times. The other half inserting a letter ‘q’.

[edit: tried a plain old usb keyboard and does the same. I don’t have any bt keyboard that I want to unpair from their device and try on the ppm right now]

The other half inserting a letter ‘q’.

Yes, that’s because it registers the Enter key as an OK button, meaning it will click on the letter that’s currently selected on the virtual keyboard. What I do is make sure the enter key is highlighted on the keyboard, then an Enter press translates to an OK on the Enter key. It usually remembers that I parked the highlight on the Enter key.

Seriously, this has to be fixed. When I plug a keyboard, it should work as a keyboard. Every single modern android device I own won’t show a virtual keyboard at all.

There isn’t a single thing I’d like to do with the ppm that works as intended without ugly workarounds.

Those devices were built as Android devices. PPM is a projector with Android bolted on top.

The USB port was intended only to plug storage media for playback. Due to popular demand from the campaign the dev team was pressured to change the default USB to host mode at the last minute, enabling plugging in any USB device. This change was done as recently as October. The AOSP keyboard doesn’t respect presence of a physical keyboard, and pops up anyway, even when you change this option in the Settings of both Android and the keyboard. Since the PCB assembly had to be released, there was no time to strike a partnership with another keyboard maker (in the past we had a partnership but it’s recently been changed to AOSP or google keyboard only), then integrated and test it and then release the factory FW, so AOSP keyboard was left in place. Soon afterwards update .25 was released to fix the most high priority stuff. Since then the Systems team has been locked in their homes.

Hope this explanation sheds some light. I know from the user’s perspective it appears unpolished, but this campaign exposes a lot of behind-the-scenes situations that you wouldn’t see on a finished, off-the-shelf product. The priority with PicoPix Max was the build and finish to be finalized and then ship asap, then issue SW updates every 2 weeks till it’s ready for store shelves.

Then it is a bug with the AOSP keyboard. Someone just needs to file a bug in github?/gitlab? or even fix it directly.

For now, Null keyboard is a workaround if you always havr a connected keyboard. Otherwise, there might be an alternative keyboard from the store that does this better.

I’m a bit late to the party, only started using a BT keyboard with the PPM today. And just to note, I do really enjoy my PPM after 6 months of use

Prashant, hopefully the teams have been able to get back to speed on all fronts since February! Do you know if there any way for the SW team to override/fix the virtual keyboard when a physical keyboard is connected? I noticed the settings in the secret menu don’t work to hide the keyboard as you mention.

Is it on the to-do list or is a fix unlikely and will we have to cope with the virtual keyboard popping up always?

Edit: @PhilipsEngineering tagging, not sure if you get notified otherwise.

Hello @GeoffAlex it dropped off our task list, but thank you for bringing attention to it. We will add it back and prioritise it.