Audio is not sync'd with the video

The audio video sync on my PPM is off (with or without a bluetooth speaker). Does anyone else have a problem with this. We could use a sync adjustment in the projector settings.

I have this issue as well. So far I’ve had to just plug my laptop into the projector via hdmi for video, and then send audio to my receiver from there. Not able to use any of the integrated apps, or use this projector wirelessly due to this problem. A sync adjustment setting would be great, or…just fix the problem so users don’t have to do anything and it just works…

Which Bluetooth speakers are you using? And which apps?

I’ve personally tested Bose QC35, Apple AirPods, Amazon Echo Show 5, Samsung soundbar, and have not experienced audio sync issues. Sometimes there can be a slight delay for a few moments till it syncs back up. But def not what you’re describing.

@davidnoah Are you playing a video file, and in which format? Some file/container formats can cause video/audio sync to be lost. Since it happens even without Bluetooth, this would be my guess.

I am using Hulu (both the installed version and the one in the aptoide store, the preinstalled one crashes often - the aptoide store version audio sync is way off), Prime Video, and definitely using Airplay mirroring from my macbook. I havent use Netflix much recently.

I have the same issue. Audio isn’t synced correctly, even on the PPM’s speaker. Only Netflix seems to work correctly.

Most likely this issue depends on the app you are using.
Please elaborate which apps you see this issue.
For example, there’s audio lag on MX Player Pro but if you select SW rendering for the audio, it’ll be fixed. I don’t see other audio sync issues on other apps.

I have the problem with OCS, MyCANAL, Orange TV, Amazon prime video. Every app I have used up to now except Netflix. It’s very light but just enough to make something feel off when you try to watch something…

Audio isn’t synced correctly, even on the PPM’s speaker.

Sounds to me like a codec problem. But here’s a crazy thing to check: go to Settings > System Cleaner and run the cleanup one or two times. Does it help?

Yes, most likely a codec thing. Probably same cause of the laggy playbacks.
I do have one app that has audio sync too. The streaming app for my cable subscription.

I just did it. It doesn’t change anything.

Do you have any ideas ideas on how to correct the sound lag? Is my unit defective?

It appears in your posts that you have only tested streaming playback. Can you try a basic test with a video file directly on the PPM, played with VLC or MX Player and sound thru PPM speakers ?

No it’s not defective, this is a software playback problem, and my guess is due to the video / codec. We need to get to the bottom of this. If this was a bluetooth issue, there would be no delay when connected by wire to the audio jack.

I just tried Prime Video and can’t observe any delay when playing sound via internal speakers.

Can you please confirm whether you have audio delay even when playing from internal speakers?

Yes I have audio delay with the internal speaker. It is very light (you can basically only see it on lips in dialogs, you wouldn’t notice it while watching sports per example)it just gives you the impression that something is off when you watch a movie and gets you focusing on that for the whole movie thus not enjoying it. I do not have any instruments to measure it and was wondering at first if I was inventing it but I showed it to friends and they all noticed it as well. When I try to watch the same movie from the same source on my iPad, iPhone, TV or PS4 I can’t notice any delay. I am not just complaining for the fun of it, I would really like to find a solution.

Also I am streaming over WiFi on a fiber optic network with around 200 mbps rate so I believe the network can’t be incriminated. Live streaming is very slow on the PPM also. I wondering if there couldn’t be an issue with the PPM’s WiFi receptor.

I am not just complaining for the fun of it

Hello @David_12 please do not get frustrated, this is normal part of debugging to ask many questions and rule out different scenarios. Just knowing that ‘there is audio delay’ is not enough to find and fix a problem. So thanks for providing more info.

If you have a delay also on internal audio --> it’s not Bluetooth related.
If video plays smoothly --> there is no network problem.
If there’s no sync issue on at least one app (Netflix) --> it’s not a hardware defect.

So we can rule those out. That leaves the app itself and the video decoder as the possible source of the problems. I’d like to focus on Prime Video since that’s an app I can confirm works fine for me.

Q: Are you playing the default audio track (i.e. English audio for English show / French audio for French show etc.), or a dubbed audio track? This can be changed from the top-right corner Subtitles icon: 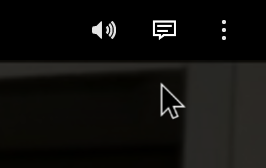 Does changing to another audio track make the problem worse or better?

I’m not getting frustrated. I truly understand how troubleshooting works (I used to work in tech support).

I only watch default audio tracks. Dubbed audio tracks obviously can’t be perfectly synced. In the present case when I watch per exemple Vikings on Amazon Prime in English it feels like the audio is dubbed in English (as I said before it is really light it just gives you the impression that something is wrong)

I’ve also noticed a delay only on Bluetooth. Internal apps it works fine for me, but when I’m using hdmi it’s fine for a little bit then after awhile it gets out of sync. It’s gotten so bad that at most I thinks a 1s delay. I’ve used multiple BT speakers connected via BT directly to the PPM or to a Apple TV/Fire stick. All of them get out of sync.

Right now my solution is just using a direct connection through aux cable but hopefully there’s a fix for BT soon.

Hi @jer_dizon , I’m sorry I don’t fully understand the problem. If you’ve connected an Apple TV or FireTV stick to the picopix via HDMI, and your Bluetooth speakers to the ATV/FTV directly, then the picopix is just a dumb screen and has nothing to do with audio.

I have such a setup at home, FireTV plugged into dumb projector, and soundbar connected via Bluetooth. I have no delay whatsoever even when watching for hours on stretch. So I think it depends a lot on your speakers and which app you’re using.

Hi @David_12, do you have this problem with a specific show, or with any video that you play? I’ve been testing Prime video on picopix max and can’t notice any delay when it’s original audio. With dubbed audio I notice a slight delay but that’s probably an illusion due to the different language.

Any way you can make a video clip of the problem?
Also, does changing the playback quality in prime video help at all?

Yesterday I took delivery of a 128Gb micro SD card, and was eager to test it. For me, having the ability to be truly ‘wire-free’ is so appealing!

I projected ‘The Wicker Man’. I connected my Bose SoundLink Mini bluetooth speaker via bluetooth. My logic (maybe flawed!) is that internal video and sound from the PPM would successfully sync, but it didn’t. There was noticeable lag between the two. It varied as well. I tried connecting the speaker via an Aux cable to the PPM jack, and it didn’t improve things, which seems bizarre.

I did one more test. I connected the PPM to HDMI and the speaker and Aux cable to the Mac Mini that it was being served from. The sound/video syncronisation was perfect.

Any ideas, observations or solutions from others who have countered the same problems with internal content would be appreciated! I really, really want to use the PPM as a completely standalone item. At present its use as a ‘portable’ projector is a little disappointing.

On a separate note I noticed that when I went into the File Explorer to play the movie from the micro SD card, there were three software options for playing the video. Is one of these players better than the others? I am not sure why there needs to be three different ways of doing the same thing.

Thank you for any help!
Andrew