Design issues with tripod mount, and other minor issues

I’ve been using my PPM for 3 weeks now, I must say I enjoy using the device, but there is one thing that bug me all the time…

IMO, the tripod mount is not designed properly (as compared to photographic equipment and others). The depth of the screw thread is too little/short, this make it impossible to properly/securely mount the PPM onto standard tripod mounting plate. The PPM will not make full contact with the plate mount even if the mount screw has gone all the way in.

To add on, the tripod mount (or screw hole) is not flush to the base of the mounting square. This make it really difficult to secure the PPM onto standard tripod.

Perhaps the next iteration of the PPM will address this.

This basically means when the PPM is mounted onto the tripod, it’s resting on just the little contact area near the mounting screw, not the square around it.

I have found this same issue. The depth of the thread to mount a standard tripod plate to is too shallow. I’ve tried with two separate tripods and the same issue with both.
There is also a excessive amount of flex between the exterior housing of the ppm and the tripod plate. This leads to false adjustments when trying to align the projected image to screen.

I have also realized that the image projects at quite a steep angle - needs to be tilted up about 7° to get image to appear “Straight”. At first I thought that this may have something to do with shifting elements in the auto vertical keystone correction. But no matter what I do, it never projects the image straight out when the tripod ball head is level.

needs to be tilted up about 7° to get image to appear “Straight”.

That’s odd. Do you see any indication of digital keystone correction happening at that point or is it in fact “optically straight” at that point? If I interpreted the specifications correctly you’re supposed to get a straight/square image when the PPM is placed completely flat and perpendicular to the screen. The bottom of the image should be at the same height as the center of the lens (100% offset). Maybe something’s not 100% aligned inside if that’s not the case.

@PhilipsEngineering and @PhilipsNono Could we kindly have your input on this one? Are the team aware of these issues mentioned in the post ? Cheers

The accessory tripod is already broken and unusable
Poor durability

That’s not bad for a small consumer projector, given the extremely small margin of error here. I wonder how much this differs from unit to unit though…

I ordered a basic tripod for use with my PPM, and also found that I could not get the PPM to mount securely as the mount hole was too shallow. That would not be so bad except that it is on a section, as the pictures above show that protrude from the base of the projector.

I solved it by taking a round, self sticking, felt pad, designed to protect a wood floor from furniture, cut in in half, and stuck it to the tripod, leaving a gap in the middle so that the mounting “base” could recess in to it.

I have exactly the same issues with my projector’s tripod mount. The threaded hole is too shallow for every one of my AS-type plates/ screws, most of them all the best hardware from companies like Acratech, RRS, and Hejnar, as well as some from Desmond and Benro. I modified one screw to fit but then I noticed that ”bump” due to the brass bushing protruding from the “foot”, and even tightened the thing is wobbly on my tripod.

I agree that little tripod that came with my projector is itself wobbly, but mine is aldo defective – with the little head fully locked down, it spins freely in the panning direction. I’ve got my own much better small table tripod. Still, even if the Philips one were not broken, I would not use it

I sent an email with photo 3 weeks ago to bugreport@srceeneo.com before this new site was up to report the problems (as well as my focus mechanism being one of the lucky broken ones), but so far I’ve only received the auto-reply email from Philips acknowledging their receipt.

That’s terrible design. The tripod thread needs to be recessed or at very least level with the base. 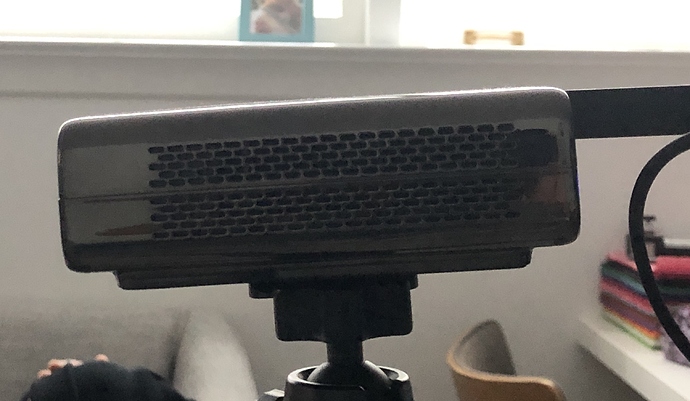 This is the angle that the ppm is at (you’ll notice level lines of the window in the background) to get a squared, straight image.
As far as I can see, vertical Keystone isn’t responsible for this. I’ll do more testing when I have a chance.
Also I’d mistakenly said “tilted up” where it actually needs to be tilted down.

That looks like quite a few degrees of tilt. Is focusing (optical sharpness) consistent top to bottom? It looks like this would be caused by some form of misalignment as we’ve seen other results on another unit earlier in this thread.

Have you had any response back on your email? It’s disappointing that this hasn’t been acknowledged yet. Do let us know what they say.

Optical sharpness seems consistent across the image.
Tested to confirm vertical keystone correction didn’t have something to do with it.
I’m curious to hear Phillips response to this.

Very nice and bright image btw. Have you considered the possibility that your floor is not level? I ask this because in some areas and types of buildings this is a requirement for water to flow towards a certain direction in case of leaks flooding etc. not ruling out that this may genuinely be an issue with your projector but it could also be building inconsistencies?

Great thinking. This is exactly what I did with my Anker Mars 2. Surprised someone else also thought of exactly the same thing

I did, but it shows up everywhere. Not a deal breaker in any mean

I feel like I have the same case but it’s hard to confirm it because you need to measure the angles of the floor, wall, etc.

Once we get the manual vertical settings, we can check how it is when the corrections is zero degree or disabled.