FAQ: How to Miracast to the PPM from Windows 10

In my setup I only saw these resolutions when casting to the PPM, not sure if it’s the same for everyone. 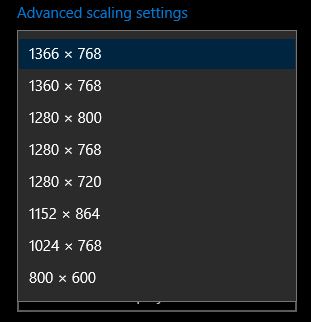 Thanks, moved to the Knowledge Base section.

I wonder if anyone is using this on a regular basis, since it didn’t work for me with the latest firmware. I was able to connect the PPM, but couldn’t move any windows to the extended screen (PPM)

Hi, for me it works well, but i’m not using it, cause i didn’t find a way to cast video+audio to PicoMax and set PicoMax to send sound to my bluetooth amp.
That’s mean that when i’am using cast i have sound that only go out from PicoMax with its poor speaker.

I’ll have a look, must confess I haven’t revisited this use case with the latest firmware 1.0.27

Doesn’t work for me, detects the PPM, connects for a half second then tries again and says “couldn’t connect”

same here. can @Philips_Support_P help with this? i also tried connecting with usbc on both ends (im using surface laptop 3) but still no luck.

Will the quality be improved? It’s pretty poor mirroring via Windows 10. Not sure what’s the issue, but it’s always pixelated with delayed input.

I’m curious to try this out when I get my PPM! I’m currently exclusively using Miracast to a MS Wireless Display dongle with my current projector, so I’d hope the quality on the PPM is at least similar to that.

Of course, stuff like video streaming can ideally be taken care of with native apps, but it would be good to have the option of using miracast for easy gaming. I wouldn’t expect the latency to be sufficient for pro players on FPS games, but for the occasional story game on the big screen, I’d rather have a wireless connection than try to wire up the place. (I guess I can still use the wireless display dongle, but it seems a waste if the projector can do miracast in principle.)

Just thought I’d bump this to show that there is an interest in the feature, if at all possible. I’ll probably give informed feedback when I get a chance to test this myself.

I was not able to use Screen Mirroring/Miracast directly from shortcut menu of my Huawei Mate 10 Pro. I thought this was because I am not using a 5Ghz WiFi.

Today I installed an app called “Miracast for Android to TV” on my Mate 10 Pro. With this app Screen Mirroring works perfect if started from the app.

The wireless Projektion button in the shortcut menu of my phone still does not work with the PPM. But it works with my fire TV Stick.

Do you think this is a problem of the PPM or my phone?

Ralph this thread is about Windows 10 - you might have better luck starting a new thread.

Thanks @Sandgroper
I started a new thread with this question but someone merged me into this one.
@IvoGrijt was it you? Can you open my thread again?

The other stuff I’ll have to test out later on for you.

IvoG have you been able to get it to cast at anywhere close to usable quality? When I’ve tried the resolution is terrible and so is the lag. I’m really struggling to think of how I can surmount this issue. I just need the highest fidelity way to wirelessly cast from a windows 10 machine to the PPM. What are you doing yourself?

I have the same problem as described with my PPM and latest Firmware version. I can find the projector as a wireless projection device but the connection either fails or drops after a few seconds in status “connected” (never showing the actual windows screen). Any suggestions how this could be fixed? Your help would be very much appreciated - one main use case for me was to use projector as wireless screen with windows 10.

edit: I’ve opened a feature request for this, as that seems to be the best chance that this might get improved (if at all possible).

original post:
I’ve also finally gotten my hands on my PPM, overall I’m very happy, but the Miracast implementation does indeed seem very limited. I wonder if that’s a software or hardware issue.

Standard of comparison
I’m mostly comparing to the Microsoft Wireless Display dongle (I think version 2), which is what I have used so far with my current/previous connector (and which I also use for presentations etc. in professional/education settings).
I also used to use a cheap Chinese Miracast dongle in the past, which occasionally lost connection, showed artifacts and often had issues keeping video and audio synched. I don’t recall specifics about the input lag (I think it’s been about two years since I last used this).

Android - Miracast experience on PPM
It seems to be good enough for showing pictures and videos from an Android device. There is a noticable delay in response (in swiping through pictures/videos in the Gallery it seemed to be about 2 seconds), but video playback itself seems to be fine. I didn’t particularly check for picture quality and didn’t try out a lot, but it seemed to be decent.
I suspect given the input lag Android gaming via the cast functionality might not be feasible, but I haven’t tried this (yet?).

Considering the issues encountered with Windows casting (see below), I’m not actually sure which resolution the miracasted image uses with Android (not sure if there’s a clear way of testing that).

Limitations of Miracast experience in Windows
I had no trouble finding and connecting to the projector from my Windows installation (you need to go to the Miracast app on the PPM first, of course).
However, the input lag makes navigation very unpleasant if you’re intending to actually operate on the projected screen. I haven’t measured it in detail (not sure what the technically most sound way would be), but what I reported above for Android seems plausible, i.e. about 2 seconds delay. Which makes using a mouse quite taxing for your brain.
This completely rules out using the integrated miracast for any kind of serious use apart from displaying more or less static content (possibly video casting, but you can normally do that from the device itself), so presentations might be ok, but you can forget about doing anything interactive unless you are very very patient with your input methods.
Thanks to the integrated capabilities I won’t need to project to the device for most/all video content, but one of my use cases with the MS Wireless Display is to occasionally play games from my PC on a large screen. Obviously nothing competitive FPS players would do (I actually haven’t tried playing something like Counterstrike this way), but we’ve played games like Hellblade: Senua’s Sacrifice or A Way Out this way without a distracting input delay - I’m sure there’s more delay than with a direct HDMI-cable connection, but I never found it noticable or distracting.
On the PPM, I haven’t tried this yet, and I think unless there are siginificant improvements I won’t because the input delay is immediately noticable just by moving the mouse. This means that I can’t even imagine using this setup for round-based games (whyever one might want to play them on a huge screen) because you’d get mad trying to move the mouse and then wait and see if you moved to the intended button.
The second major issue is the resolution. As mentioned above, for some reason the max resolution I can get on windows via Miracast is 1366x768, so no FullHD (this is what made me a bit suspicious if even when casting from Android you actually get a fullHD resolution). Again, not sure if this is a limitation due to limited bandwith on the hardware side or some software limit.
Due to these limitations I haven’t further tested the qualitiy of the casting for artifacts etc.

Conclusion
So for me the Miracast feature is fairly useless as it stands, at least for Windows. Luckily, I have my Wireless Display dongle, which gives me FullHD resolution and hardly any noticable input lag (and just the occasional visual glitch). It is a shame however to have a device that could offer an all-in-one package doing so much worse than a dongle from 2016. If the limitations could be alleviated in software, I’d very much appreciate it.

Like what the person said above, at this point is useless.

I downloaded an app called AirParrot 3 which allows streaming of my Windows10 via airplay and it seems to work pretty well. I don’t know if it’s full 1920x1080 but definitely better experience. I can do demos on my machine now without the lag I was getting before.