some good news coming out of Philips Projection R&D team. v1.1.0 is still chugging along and we expect it to be at least out for beta towards the end of the week, if not released.

Use the offline software update method as usual.

Once merged with the updated Launcher and with a couple of additional fixes, it will become 1.1.0.

We have some major improvements:

This update finally includes our adaptive fan speed algorithm. We listened to your feedback to adjust the target temperatures for each mode. Many people asked us to slightly increase the core temp in exchange for lower fan noise, well your wish is granted. In our testing in a normal summer room, we found the Presentation mode is now quieter than Normal mode used to be. Normal mode is quiter than Eco used to be. And Eco mode is dead silent inaudible. With this update I am confident that for most people (remember it depends on environment), this is going to be the quietest pico projector experience on the market. Keep in mind our internal QC is still going on so these values are likely to be re-adjusted, also based on beta tester feedback.

A lot of you reported that when connected to a 2.4GHz wifi network and playing audio via Bluetooth speakers, there’s a lot of stuttering, specially when the remote control is active. This update improves the recovery algorithm for such interference. While the proper solution is to switch to a 5GHz wifi network so 2.4 band is free for BT, we understand not all of you have this option. This update reduces the chance of a jam, and recovers more aggressively if a jam does occur.

A lot of you requested this feature for some specific setups like projecting on a tilted rooftop. This update adds manual keystone correction. Just turn off the automatic one and then set it manually yourself. 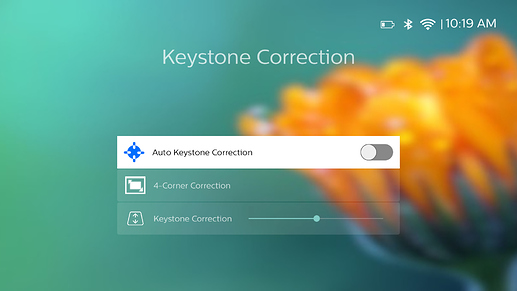 Upcoming - Kodi fix with a catch

After 1.0.31 there might either be a 1.0.32 or directly in 1.1.0, we will add a “fix” for Kodi. The main reason for bad gfx performance is the 4-corner correction feature which is very GPU intensive. Although most apps still work OK, Kodi is an exception because it uses 3 separate HW overlays on top of the video. Other apps use perhaps 1.

After months of negotiation and technical discussion with RK, we can present only one solution to run Kodi at 1080p with great performance: disable 4-corner correction if you need to extract the last level of performance out of the GPU. Together with an update to the HW compositor policy, this ‘solves’ the problem. (v1.0.31 doesn’t have this gfx driver yet).

In our testing there is a massive visible improvement in GPU performance. The UI becomes completely fluid and animations run at close to 60 fps. It must be noted that other similar devices which run Kodi perfectly do not have a GPU-intensive processing applied on top! But the silver lining is that all apps will benefit from this performance boost.

We are still running internal testing, expect the beta to drop tomorrow.

The main reason for bad gfx performance is the 4-corner correction feature which is very GPU intensive. Although most apps still work OK, Kodi is an exception because it uses 3 separate HW overlays on top of the video. Other apps use perhaps 1.

This explains why I never experienced issues in Kodi, as I don’t use the 4CC. I mean, I’ve tested it and it works, but I prefer to just center the image properly and only use the Vertical Auto Keystone correction (thanks for the Manual Keystone Correction by the way!

Hi Ivo I’m sure you will still see better performance because this improvement also requires a new gfx driver which can change compositor policy in addition to disabling 4cc. Only the combination of these two truly solves the problem.

Hi, just for my understaning. Keystone correction will be still possible, since it is not done by the gpu, Right ? - So only 4cc will maybe not be available with Kodi to save some gpu power. But overall the gpu driver update will bring a massive performance update, which will be visible on nearly all apps.
Is this correct ? I think that would be great news. At least it does not require a special patched Kodi version like suggest at first place by Rockchip. (or use a fork of Kodi). - Will there be a visible performance win even with 4cc enabled in comparison to the current fw ? Testing will be exciting

I think I’d wait for some feedback first regarding the adaptive fan speed. It’s currently summer here and it’s very hot. My PPM might need more airflow for now

As for Kodi, I don’t really use 4 corner correction and Kodi is still not smooth so hopefully the driver will make the system better perform overall.

Thank you for these good news BTW

Hi @trappm yes but you are partially correct.

The driver improvement and disabling 4CC, both are required to get the performance improvements. It’s not only for Kodi, though it is benefitted the most. In other words, only the new driver has the feature to completely turn off 4CC and reclaim lost horsepower.

It doesn’t require any forked version, you can use stock version.

When you re-enable 4CC, all performance improvement is lost.

I have not profiled it properly, but going by my eyes it’s about 1.5-2x faster.

Is there any adaptative fan speed (to automatically increase fan speed with higher CPU temp) with this version, or planned in 1.1.0?

I see. I figured 4 corner is gpu heavy since it warps everything it displays and computes them real-time.
Speaking of, when do you think will is be fixed? I mean the incorrect warping in 4-corner correction

Hi @kugiigi it’ll be done but I don’t have a time line. First to get these high prio fixes out. It’s debatable though abt the priority of the warping bug but I found I don’t have a problem enjoying movies, at least not as big as the fan noise or audio stuttering.

Okay thanks. I don’t really use 4 corner but I’m worried that one day I’ll need to use in front of other people and I don’t want to explain them, “oh yeah, that’s a know bug, sorry

Quick update : I felt the fan adjustment is not aggressive enough in certain situations, so I’ve asked our engineer to optimise the parameters further. For instance it was 7 minutes without a reduction in fan speed when booting into presentation mode and then switching to eco.

We are still expecting the beta to be uploaded for your testing today.

Hi again folks, beta 1.0.32 is available now. Check the first post of this thread for the download link.

Kodi fix is inside but it is disabled. Friday beta will have it enabled. The other changes are the same as described in the first post, the delta between 1.0.31 and 1.0.32 is more responsive fan speed controller.

A note about fan speed

The Presentation and Normal mode are much quieter, and Eco mode is totally silent. But note that the light engine is not like a computer processor, it does not heat up and down as fast as a CPU. What that means is – it’s possible that once heated up in Presentation, it doesn’t get quiet quickly when you come back down to Normal mode. Go to Eco and let it cool for 5-10 min. Afterwards going back to Normal should be quieter than when coming from Presentation mode.

Key points to test in this beta are:

Thanks in advance for your valuable feedback!

PS: the Launcher will be updated separately, it can be installed on top of this beta.

More tests to come…If cooling is still sufficient, that is really cool. Was not expecting such a low noise level.

I’ve only found a way to show the battery temp via an app. But it still shows 18.8°C with the new firmware. 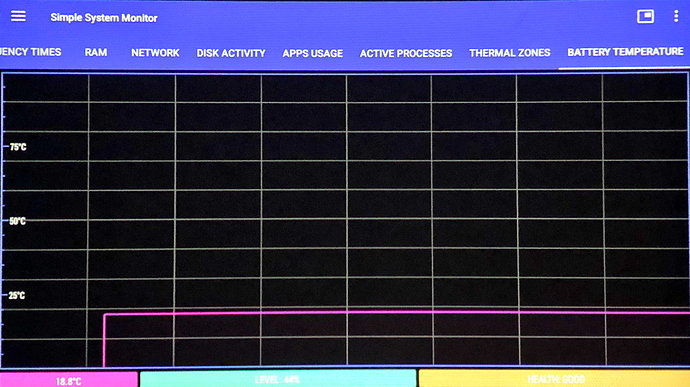 Measurements made with my iPhone laying on the table 20 behind & 10cm below the PPM, which was attached to the Philips tripod, PPM powered by PSU, playing an episode of LEGO Masters Australia season 2 from my NAS via Kodi.

If you know how to setup adb, you can do adb logcat | grep Tempture (yes, misspelt).

Hi, Interesting stuff, I got adb to work. - Hope I catched the correct adb message. Find my measurements below :

I find the fan reacting quite fast to changing temperatures / modes. From presentation to eco mode it took around 1 min in order to spin completely down again.

The temperature sensor is an internal one, I don’t know whether it’s readable by any off-the-shelf programs. I’ll check.

Thanks for building this graph, and thanks @IvoGrijt for measuring the noise level. It’s exactly the kind of detail we’re looking for.

It seems it’s working as expected, the temperature targets are being maintained. More testing is always welcome!

@trappm did you measure with power supply connected, or on battery? This is very important, on battery only 3 LEDs are active, on power all 4.