We are pleased to announce the release of system software V1.2.4.

This update brings many improvements to the Home Screen:

Cloud apps appear alongside your regular installed apps. You can simply choose any of them to download and install them right away. These are third-party apps provided by us, a bit like a mini App Store, but simpler. 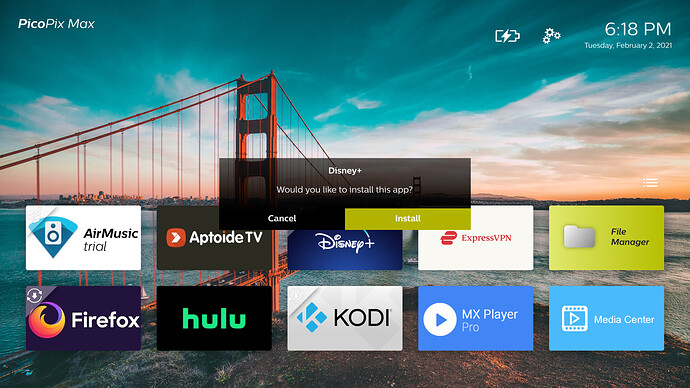 You can turn off this feature by going to the grid view options and selecting “Hide cloud apps.”

The home-screen can now update itself separately from the rest of the system. If an update is available, you will get a popup like the one below:

You can now “favourite” apps by pressing the MENU key on the remote. These apps will be shown before all other apps.

Apps that you use most often will show up earlier in the list. You can turn this off if you wish. 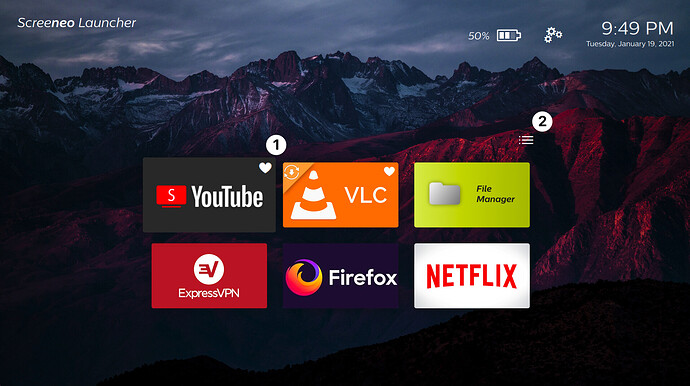 If you’ve been following our Sonos integration feature suggestion, you’re probably aware that you can now install AirMusic trial version straight from the Home Screen to test out Sonos, AirPlay, DLNA, Google Cast and similar audio output options for your PicoPix Max. Please note that this feature is experimental right now.

After upgrading, you will immediately receive an update to the Home Screen Launcher. This update fixes a few bugs and is highly recommended.

Simply go to Settings > Software Update on your projector and Check for an online update.

If you prefer, you can also follow the INFO: How to do offline software update? guide.

Awesome love the update. Installed without a hitch. Like the favourite feature.

will the update break my adb based automations? aka automatic auth and private adb keys (usb debugging and Internet adb)? thanks

@PhilipsEngineering How about the blurred projection issue which was plaguing the prior release? Has this been fixed??

Thanks for this update and by keeping the picopix max up-to-date. All went well, still a great product !

After updating the Screeneo launcher and shutting down the PPMax; and than, after a while restarting the unit, it asks me again to update the launcher. Has anyone experienced this.

So far I love my ppm and haven’t had any unfixable issues. Thank you for coming out with a great product and continuing to keep it up to date. I use it as my everyday gaming and tv device and I love bragging about it to my friends

Are there problems/bugs that have been solved with this update that someone knows of?

Yes, same happened to me. It took like 3 or 4 times 'till it actually updated and stopped asking.

Awesome thanks for the update on Sonos. Unfortunately the air music launcher doesn’t install when I click on it. It does nothing. I checked in file Explorer and found the APK it created and it’s at 0 bytes. So, looks like it corrupted. Anyway to get this elsewhere? I can’t find it on apptoid.

I found the same thing with another App, it looked like nothing happened but after a few clicks too many it actual downloaded.
I suspect it’s because the backend Web servers are not scoped very well and are under high demand with the release of the new Firmware.

Disney+ Has been a bitch to download even before the update. I had to go to APK Pure to download it but this version won’t let me download for offline viewing

Airplay quality is higher visually, but the level of delay is substantial as is the number of pauses/freezes while the video plays on on my mac.

Actually, the quality of the video in general seems better! Is that just in my head?

Any other issues I have seem to be Gem app issues, not the PPM.

I also noticed the overlapping wallpaper while changing it.

Hmmm. Updated to the new version of the software OK but it’s not working properly. I can see the menu icon just above the apps on the right side but I can’t open it in any way - it doesn’t respond to being clicked. Can’t see any hearts on the app icons or a way to favourite them using the menu button on the remote. Re-starting makes no difference. It doesn’t make any fundamental difference to the operation of the projector, but it’s disappointing nonetheless.

What type of content are you trying to cast via chromecast?
It was working on mine with Chrome tab casting and casting pictures/videos from Google Photos.